velotric discover 1 is a long-range e-bike characterized by its slim design, ideal for city commuting.

Visit the original post to see all 3 images from this gallery.

Flowers for Society is a new sneaker brand that aims to combine the worlds of sneaker collecting with that of NFTs. Both worlds overlap in the sense that they are built on peoples’ innate drive to collect exclusive things, and the potential for making money off of said items. Flowers for Society hopes to provide the bridge for both communities and change the way people consumer and collect sneakers.

The brand, which is in its very early stages, has just revealed its first sneaker design, as well as how the concept works. All Flowers For Society product drops are available through pre-orders, and each product is linked to a unique NFT. As the brand puts it: “by purchasing the first sneaker, you will gain access to our metaverse community. The corresponding NFT is a certificate of authenticity and membership, which will be the key to participating in future sneaker releases, limited editions, and collaborations.”

Basically, the brand hopes to produce only as many products as there is demand for during the first run. Then, as demand hopefully grows for subsequent releases, the NFTs will provide those that want the product with access. As demand increases for the brand’s drops, the supply of the NFTs will stay the same, meaning those will rise in value if sold to someone outside the community.

The brand’s first sneaker, which is called SEED.ONE, features a hyper-futuristic design, with a midsole that looks like it is 3D-printed to some degree and arrives with a pattern of holes in it. Subtle branding is seen on the upper, which combines a mesh base with other textile materials.

Flowers For Society also claims to put education and social responsibility at the forefront of its product drops. It has committed to building an educational center in Vietnam, a hotspot for footwear manufacturing, and promises to raise funds for other projects through subsequent drops.

The first drop is scheduled for November 6. Stay tuned for more information. 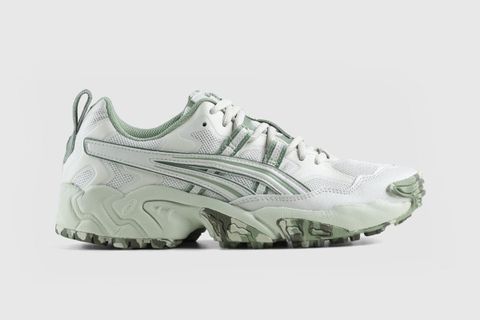 Want to keep browsing? Head to the Highsnobiety Shop for more products that we love.

Basketball has always been the most interesting sport when it comes to style, both on the court and off of it. High style standards have meant that the competition for footpace on the court is fervent. With eyes always on the players’ kicks, every brand wants to be in the spotlight. They can’t all be, though, and part of the reason for that is because adidas basketball shoes are dominating the scene.

Seeing as most of the top basketball shoes of the moment fall under a player’s name as a signature shoe, it becomes a race to sign the biggest names and adidas has secured a handful of the NBA’s brightest stars recently. From Trae Young to Donovan Mitchell, adidas has its fair share of rising stars, but with names like Harden and Lillard also on the roster, it’s clear that the Three Stripes is king right now.

So, if you were wondering which kicks to cop before your return to the hardwood in time for the NBA season to begin, look no further than the best adidas basketball shoes below.

Trae Young has made a name for himself as one of the NBA’s sharpest shooters since being drafted in 2018, so it’s high time that he dropped his first signature shoe. Featuring a beautiful gradient upper and low-top silhouette, it’s not out of the lifestyle question, either.

Obviously, your performance on the hardwood does the talking, but it doesn’t hurt to have a pair of basketball shoes that can back it up, too. This pair courtesy of Damian Lillard comes in a metallic silver colorway to set the tone from tip-off.

Donovan Mitchell has had an NBA start for the ages. Growing quickly into a leader role in Utah, the 25-year-old all-rounder already has one of the most popular adidas signature lines. This clean black & white model features a transparent ice outsole to finish.

Harden’s Vol.5 Futurenatural shoes are a perpetual favorite of ours. Not only because of the technical qualities but also because of the aesthetic. From the flowing silhouette to the polka-dot decoration, it’s a design that really stands out.

As the name suggests, this pair exists on a different level from most other basketball shoes. Featuring a midsole that merges the upper and outsole, the N3xt L3v3l Supernatural shoes give a good idea of what basketball trainers might look like in the next 10 years or so.

We already spoke about the importance of setting the tone from the moment you hit the hardwood. The D.O.N. Issue #2 Venom Shoes do just that with a heel that takes after Venom’s layered teeth.

Eric Emanuel is the king of the basketball-lifestyle crossover. Having made a name by producing the pinnacle of mesh basketball shorts, it makes sense that he was invited to work with adidas. The collaborative capsule covered apparel and footwear, but this pair of Exhibit A Shoes really stood out as a highlight for us.

Want to keep browsing? Head to the Highsnobiety Shop for more products that we love. Highsnobiety has affiliate marketing partnerships, which means we may receive a commission from your purchase.

Visit the original post to see all 3 images from this gallery.

Editor’s Notes: New Balance clearly isn’t afraid to go heavy on collaborations throughout the annual release calendar, led in large by the ever-iconic 990x series that boasts one of the most impressive lineups of partners which includes WTAPS, Levi’s, and Joe Freshgoods, to name a few.

One relationship that has been blossoming since 2020 is the one shared with Casablanca. When the pair first came together for Spring/Summer 2020, it took on the New Balance 327, and the first two orange and green colorways proved to be an instant success.

The silhouette provided something outside the status quo, living within the normcore NB family tree but feeling more like a distant cousin thanks to its less rigid design. Additional colorways followed before signaling the arrival of the archive-inspired XC-72.

Although the XC-72 is yet to garner the same level of adoration that the 327 did, it’s still proving to be the perfect canvas for Casablanca to rework.

While previous colorways have fallen in line with the resort-inspired, bold and bright backdrops that are so familiar to Charaf Tajer’s Casablanca, the latest look opts for a stripped-back, less-is-more aesthetic.

This build has a distinctly more luxury look than previous models, thanks to its high-quality perforated leather bases and pig suede overlays, both of which feature an off-white coloring. The stark palette extends across the full length of the shoe, save for green and gold embroidery on the sponge tongue, offering a subtle touch of vintage.

Even without the colorfulness of previous pairs, these are an easy win.

​​To stay updated on everything happening in the sneaker world, check out the best sneakers to add to your rotation this week, follow @highsnobietysneakers on Instagram, and sign up to our newsletter for early access to the best drops sent straight to your inbox.<e

The Slow Journalism company gears up to release An Answer For Everything this week featuring 200 questions we’ve all asked, paired with striking and informative infographics.

This article is taken from the Autumn/Winter 2021 issue of AnOther Magazine:

“Brazilian music has always been very important to me – there’s so much expression in the melodies and Brazilian singers have incredible, distinct vocal tones. When I was younger I read a Quincy Jones quote that described Simone as one of the world’s greatest singers, and I had to find out who she was and why her voice was sohellip;

This article appears in the Autumn/Winter 2021 issue of AnOther Magazine:

Ichijo talks to us about her exciting illustration portfolio, which gives space to the incredible diversity of women.

Always feel comfortable, consider more than clothing, invest in multifunction, and make sure it fits