Boy, how time flies. It seems like it was just yesterday — though it was way back in January — Bally welcomed Rhuigi Villaseñor as its newest creative director. And now, Bally officially turns the page to the Villaseñor chapter with the commencement of its Spring/Summer 2023 presentation.

Unveiled on September 24, Bally’s SS23 runway collection was certainly a sight to see during Milan Fashion Week, which already enjoyed both wild and honorary moments like Diesel’s butt plugs and Fendi’s homage to Karl Lagerfeld.

I think the question on everyone’s mind is: so, what does Bally look like with Villaseñor at the helm? Think Cali-cool meets luxury with a dash of allure.

Evening gowns feature necklines stopping just above the navel and cutouts that ditch the need for intimates altogether. One-piece swimsuits receive the suede treatment — water-ready, I’m assuming — marking the brand’s foray into the clothing category. And sleek metallic looks oozed the gilded glamour we hoped to see at this year’s Met Gala.

Villaseñor’s love for all things bold, evident in his work at Rhude, materializes as snakeskin cowboy boots and animal-esque patterns on suit pieces. The designer even issued his own modern take on the western tux, where the dainty pink loafers replace the uniform’s yeehaw steppers (and I’m not mad at it).

Equally as captivating as the pieces was the show’s attendees, which included familiar faces like Selling Sunset alum Christine Quinn, musicians Skepta and Future, actress Shay Mitchell, and model Emily Ratajkowsk to name a few.

Bally SS23 saw the Rhude founder bring house’s Swiss elegance up to modern speed, infusing the longstanding luxury brand with a new sense of cool and attractiveness. Like a few other brands this season, the label has found its sexy.

Bally’s MFW show was undoubtedly worth breaking Bally’s 20-year runway hiatus. A mere lookbook and campaign wouldn’t have done justice for Villaseñor’s preview of what’s to come in his Bally era. 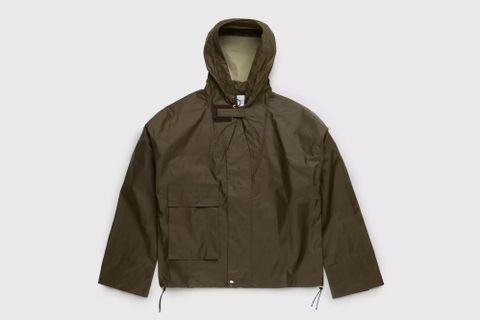